(I'm currently redesigning the blog, as I do often; and I'm stuck on a background & theme. Watch this space for a better... look.)

I wish to dedicate a post to JCR Au Pairs & Nannies - the agency I went through to get my placement in the UK.

They have been fantastic. For anyone who wants a gap year (or an adventure year like me) doing what I'm going to do, I totally recommend them. Really friendly folk who'll answer any little question and make sure you know what to do. Though it's a pretty involved process to make an application for host families to look at, I think it's worth it because you know that JCR are making the effort to check the characters of all people involved. They called everyone I used as a reference! And I want to thank all those people too. Obviously the nice things said outweighed the bad...

So thanks to Lyndsey and Michelle for all your hard work, and reassuring emails!!
Posted at 6:22 am No comments:

Email ThisBlogThis!Share to TwitterShare to FacebookShare to Pinterest
Labels: thanks

The plot gets a move on!

I've got a visa! At least, it will be in the mail in the next few days. Thank goodness. I've been dreaming about it lately. Nightmares. So I'm glad it's all clear: Folks, I'll be going to England!

I did a practice pack today. I thought to myself - what the heck? I need to know how much I can fit in a suitcase anyway. There's another garbage bag full of clothes for Salvos (third one this year) and an even bigger pile called 'Undecided.' And you know what? I got excited. It was nice. For ages I've just had stress and worry and a bit of panic (not really like me, but I've never uprooted my life to plonk it on the other side of the world before). But thinking about unpacking to a new room and meeting the family actually made me look forward to going. 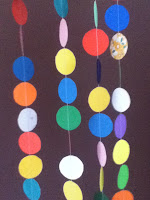 I wish I had a specific time - immovable, solid. If I had just one dollar for every time I've been asked "when are you leaving?..." I would be quite a few dollars richer. But now that I know my visa is on the way I can make flight arrangements... at least, I can give the agency the go-ahead to make my flight arrangements.

Now I'm just sealing up the boxes of stuff that's staying, and deciding whether taking my paper confetti bunting to England is a bit weird. The other thing I have to find out is... Can I take knitting needles on the plane?
Ew gross! Two mating flies just landed on my track pad. Ugggh.
Posted at 6:01 am No comments:

Well in order to get the working holiday visa, one must get their fingerprints scanned at a British consulate before the application is sent off. So on Friday night I was informed that my appointment was at 10:30 on Monday morning at 9/100 Eagle St Brisbane etc. That's fine, I thought, I'll drive up on Sunday and stay the night at my aunty's house. She wasn't going to be there but her housemate was happy for me to stay.
But golly it was a bit stressful. I don't have the best sense of direction and it's hard navigating on your own with just a few print outs from google maps...

I caught up with a friend in Ipswich which was nice; I ended up staying for church with him as well. It was a young, groovy, Presbyterian service which meant a youth band and much use of the word 'connect.'
After that I headed up to my aunty's house, which is not in the centre of the city where I ended up. I actually drove past Eagle St which was a bit ironic, but after a phone call I was on the right track and soon having a glass of milk and calling Mum to tell her I'd made it. Then I went to bed.. Gosh Queensland is warm.

The next day I bustled into the city again in my dusty camry (can I say, he did 800kms on 60L of petrol on this trip. I will miss him when I go!). I almost went through a toll tunnel (tunnel!?! I want to go over the river!) but the signs are pretty good and I knew what to follow. The next problem, after crossing the Story Bridge, was finding a park. That's funny, I accidentally typed 'funding' and that would be relevant too - the place I found cost $46 for an hour and fifteen minutes.

Finding the British consulate was simple. I arrived early and was called straight away. I sat down in the interview room in front of a glass panel and handed over my forms and passport. The guy looked up and said 'My granddaughter in the UK is Jessica Hunt, when I read this I was like "hmm?" and had to think.' Then I got my fingerprints scanned on this spacey little machine that looked like a docket printer mixed with an alien x-ray machine (being alien because the scanning area was clear green). My photo was taken then I was back in the elevator (I hate elevators) and back onto the street to find my...

Oh flip. My car. I hadn't taken any notice of the street the car park was on. If you've been to the centre of Brisbane you'll know that car parks are small and tucked away under skyscrapers or on little lane ways. I remembered vaguely the name of it but it literally took me forty five minutes of walking up and down and across streets to find it again. By then I was almost at the point of asking somebody but every second person was an all-important looking businessman or businesswoman and every other person had an ipod or a hurried expression. Strangers don't come across as very friendly in the city.

Then it was back onto the motorways following signs out of there. Thank goodness! The drive home wasn't very fun; I had a headache and was still diluting stressyness through my system. I finished listening to The Outsiders on audio (it's one of my favourite books) and that was nice, but Mum said when I got home that I as white as a sheet. I certainly felt awful.

I'm much better today. I've sent my application off to the British High Commission and I thought that would alleviate more stress than it has, but I'll still have to wait two or more weeks to know if I have a visa! Eek. Let's all hope and pray that the exchange rate doesn't budge and my bank statement will still meet the mark. Don't ask me what happens if it gets refused, I don't know and hopefully I won't have to.

Now I'll keep on going with sorting and packing my things! And crafty stuff, and people time, and doing all I can to make sure the garden stays alive while I'm away. Right now I think I might henna my hands...
Posted at 4:35 am No comments:

It's really starting to happen now... Visa business. I have already decided that once I'm done adventuring I want a job where all I have to do is fill out forms, all day. Enter my name and passport number and home address over and over again - I'd be so good at it! And I'd be getting paid! What fun that would be.

(Just a little anecdote that might shed some light on that opening paragraph: I said something the other day which I can't remember, and Izzy innocently asked 'Was that sarcasm?' and Dad said 'Of course it was, her mouth was open.' I think it would be wise to expect a lot of it in this blog..)

All whining aside, I'm glad to finally see the official stuff materialising. This year has felt a bit like limbo. When I meet someone new and they ask me what I do, it's a tricky question to answer. I was studying, I am working (although now that school is on holidays I'm not even doing much of that), and planning a big change but not there yet. "Going to England" has become a future event, not just an idea. It's good. Scary, but good. Everyday I think of someone or something else I'm leaving behind, but if I knew in advance what England was like or what I'd gain there, it wouldn't be half as fun (or hard! Uh stay positive Jess...)

It'll be good.
That's my motto, even if good means good for my character and not rainbows and ponies. Australia has plenty of those anyway. And I'm allergic to ponies. Not sure about rainbows, never been close enough; but if I smelt one I imagine I would just get water droplets up my nose.

Dear family and friends,
Yes, it's happening, I'm finally going to the United Kingdom. I've got a placement with a lovely family in London and will stay there for at least one year, but my visa will last two so it could be a while before I'm barefoot under the Hills Hoist again.

My goodness, it's so effortless to type yet such a huge life event (excuse the Facebookism)! Ah, there we go, mentioning it in the first post. I'm afraid I won't be using it again while I'm away, so everything I do (!!) will be updated here. Of course I will have email and Skype, and Viber if you're super savvy, and would love to receive any kind of messages and news from home... "Hi Jess, we watched Downton Abbey today and thought of you." Admittedly, that would be slightly tacky but still sweet.

It's hard to say exactly when I'll be leaving; I'm hoping for late April / early May. Stay tuned..
I hope I can get a chance to say my proper goodbyes, but if not - don't lose touch!

Thanks for reading.
Jess
Posted at 11:06 am No comments:

What I Talk About